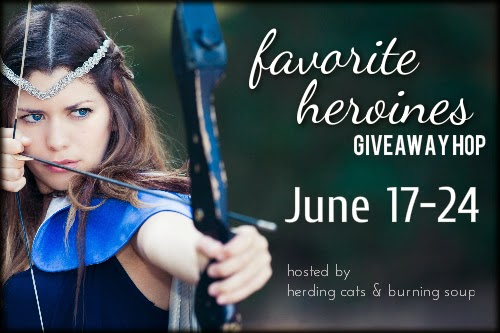 My favorite type of heroine is a woman who knows what she wants in life, creates a plan, stays the course, and overcomes barriers to the best of her ability.

Naomi Valentine from Wolf’s Strength is definitely that type of heroine.

“Hmm.” Naomi took his hands and pulled them around her waist. “Why do I feel as though my find is being stolen from me?”

“You think so?” Blake pulled her body closer to his.

“I found him first,” she teased.

Blake chuckled softly and raised an eyebrow. “You think so?”

“We can duke this out. Winner takes the bait to his Pack.” She bit her bottom lip and hooded her eyes suggestively.

His slow smile built into naughty grin. “I’ve got a better prize. Winner takes all.”

“And by all, “ she slid her palm against the back of his neck, “you mean?”

“All of you.” His lips were centimeters from hers.

She couldn’t help herself and crushed her lips against his. A spicy and metallic taste filled her mouth all at once, and velvet lips smoothed across hers. Only moments earlier when she had the fate of her Pack in her hands her heart had been empty, but now it was filled. Their mouths united, fitting like the pieces of a puzzle. Their tongues danced playfully as if this was their first time.

They fell deeper into kiss. She wanted more, needed more. It had been weeks since she was filled with the sustenance that kept her going. This sustenance was like a drug. The more she took, the more she wanted until suddenly it was a need that couldn’t be overlooked.

He sipped her tongue and nipped her lips, kissing her senseless until they were both running on limited oxygen.

Finally Blake pulled away from her but held her waist. His gaze ran across her face. “I wanted to murder him for touching you that way.”

“So did I,” she whispered. “But you understood why that couldn’t happen. We needed him for answers.”

“And more importantly, you told me not to.”

“But sometimes I tell you not to do things, and you do them anyway.” She traced the hard line of his jaw.

“You’ve got me there, but that’s not the way things work. If you want to know the truth, if Aiden hadn’t come when he did, the dude would have been dead.”

As a wolf thinking in terms of possessions, Naomi understood this. If a person tried to steal the last meal of a hungry wolf, they would be lucky if they got away with a limb.

Naomi’s fingertips traced the hard ridges of his chest through the open tear on his shirt. “You’ve got a lot of aggression left in your system.” She licked her lips as her fingers played against the seam of his jeans. She wanted inside. It had been so long since she had him.

Blake pressed his hardened groin into her hand, licking hotly against the cartilage of her ear. “And my aggression is something I’ve known you to release very well.”

He nipped her earlobe, pressing the cold tip of his nose against the sensitive spot behind her ear. Liquid pooled in her center and she clung to him greedily.

“I’ve got a room waiting.” She panted. “Won’t take long to get there.”

Tension grows between old rivals…
Cold-blooded murder sparks a feud that could reignite the hatred between two dominant packs. Alpha Devin Caedmon and his council are tempted to risk all that is precious to protect their bloodline, but Tristan Arnou, the rival Pack’s leader, isn’t the only force trying to tear down the unity holding them together. All threats must be eliminated before the entire wolf shifter race is destroyed.

Forbidden love burns like a wildfire…
There is one woman who Blake DeLuca loves more than anything else: Naomi Valentine. Despite the escalating battle and power struggles among their leaders, the fire between these two lovers has yet to be extinguished. Naomi’s heart belongs to Blake, but her allegiance lies with Arnou. She’s left with two choices…assume her duty or accept Blake’s eternal bond?

In Wolf’s Strength, secrets are unveiled and old memories long buried have resurfaced. The game of deception is a deadly one. There can be no peace until the bloodshed ends.

Comment below for your chance to win the first 3 ebooks in the Caedmon Wolves series and don’t forget to follow the hop for more chances to win more prizes!